From Backyard Barbecue to the Big Screen:

Mark Lobene and Jennifer Jiles have known each other for years. Mark is a longtime friend of Jiles’ husband, so at social gatherings over the years, the two have exchanged stories about acting, compared notes on auditions, and attended each other’s performances. But, they had never actually worked together. Then one day, Mark was at Jen’s house for a BBQ and asked if Jen wanted to shoot a scene or two with him for his actor’s reel. He generously offered to pay for it. Jiles says, “At the time, I’m thinking, I don’t really need to have any scenes on my reel, but I sure would like to make a film! So I came up with the idea for “Mother of the Week”, and luckily Mark loved it!” Mark said, “I was taken by the fact that this was a real mom’s view of life, and it was quite unique, unlike every other family comedy production. The edge and humor, while easy to enjoy, came from insider knowledge. This made it special to me.”

Jennifer wrote the original story and worked with her friend, fellow writer Fred Stroppel to complete the screenplay. This film is not Jiles’ first attempt at writing. She has written a critically-acclaimed one-woman show, KICKING & SCREAMING, The Musical!, about her life behind the famous Radio City kick line. And after performing it Off-Broadway, and touring it regionally, she also performed it as a benefit for Make-A-Wish.

When the screenplay was ready, Executive Producer Mark Lobene put up the money and happily agreed to play the husband, and Jennifer Jiles added Producer to her writing and casting credits on the film. The crew was hired and the process of making the film was coming together. Shooting lasted six days, in a total of five locations, over a time period spanning three months. Post production was completed in March 2015. Jen Jiles met Steve Pollak, AKA: Dude of Life, one of the writers for the band, Phish, in the local dog park in Ossining, New York. The two quickly realized that their youngest kids were in the same class at school. Overhearing Jen talking to the director on her cell about needing a house with a trampoline for the shoot, Steve offered up his house. As he got more involved with the film, Steve offered to write the theme song “Mother of the Week” with his writing partner Charlie de Saint Phalle. Pollak says, “I was inspired by Jen Jiles and what she told us about the film to write the theme song.” Jiles was thrilled and even got to work on the lyrics in studio with them, and says, “I’ve never worked on a song before, and to see it all come together was really amazing.”

Since Jiles wrote the original story, co-wrote the screenplay, cast the film, stars in the film and is a producer as well, shooting Mother of the Week clearly wasn’t a typical acting gig. “Yes it was fun, but it was also a challenge to have so many roles on the film. As an actor, you dream of being the one sitting behind the table at auditions deciding who you want to work with, instead of waiting in the hallway for your name to be called. You want to be a producer, to be able to make decisions, but along with that comes the pressure of solving the problems. I’m glad I gotto do it. I won’t look at other projects the same again. Having Mark there to help with the business decisions was really important.”She says the excitement of seeing her original story come to life trumped the difficulty of focusing on the minute details of her producer tasks while delivering her performance.
The scene where she pours the Cheerios all across the bowls, then rushes to get the kids off to school, wasn’t exactly in the screenplay. It was “Producer Jiles” moving the shoot along to get back on schedule, as they had many more scenes shoot that day. Turned out to be a funny bit for the film.

When Jennifer Jiles moved to Croton, seven years ago, it was to raise her family in a nice community, while staying near New York City, where she is often called in for auditions and jobs. Now Croton is the backdrop for her short film, and she is bringing New York City based cast and crew members up to Croton for the shoot.”I love the idea of supporting local businesses in the area. It’s a tight-knit community, and by gosh, they have been so supportive of me,” Jiles says.

A lot of favors were called in to secure the shooting locations for the film. While writing the screenplay, Jennifer had certain local spots in mind that were perfect for the storyline. (They were also places she felt might provide free access to help the movie stay within budget.)  Vogue Nails, her local nail salon, was the location for the very first scene shot on the first day of filming. They were more than supportive—opening up early, providing the manicurists, all for free, and giving the DP and director all the time they needed to shoot the scene. “When you are taking on a big project like this, it’s kind of nice to do it in your own back yard, surrounded by familiar faces,” Jiles says.

After the nail salon scene was complete, the crew packed up and headed to the next location to shoot the office scenes. The “office in Manhattan” is actually Jiles’ brother John’s office in White Plains. He gave the crew full reign to do “what they had to do as long as they left it the way it was before they came”. Shooting in the office lasted into the night, and on the following day, the crew began shooting their first outdoor scenes at the school.
In the early stages of planning for the film, Jiles had set up a meeting with Joseph Hochreiter, the Superintendent of Schools, and she was quite prepared with her pitch asking to use one of his elementary schools in the film. Before she could say anything, MrHochreiter announced, “So we’re making a movie!” The pressure to persuade him was off, and another location had been secured.

The rest of the film was all shot at what would be the character’s private home. But in reality, the various scenes were shot in three different homes. Jen says,”I’m so lucky to have friends willing to invite a film crew into their property for hours on end.” Jackie Montroy, Jen’s great friend and hair dresser, who also did hair and make-up for the film, offered her beautiful home for a weekend shoot, along with Jen’s other great friend Jodi Killgannon who offered a place to shoot Noah’s bedroom scenes. The remaining scenes at home were shot at Steve and Leslie Pollak’s private house, including the interior hallway, bedroom and backyard trampoline scenes. The cast and crew spent the most time, two full weekends, at the Pollak’s house. In addition to opening his home to the film, and writing the theme song, “Mother of the Week”, Steve Pollak helped the production out of a jam. When the driver transporting the crew and gear was stuck in traffic and couldn’t return to the set to pick them up, Steve fired up his own van and drove the crew back to the city with their gear after the last night of shooting.

Extra Extra: All of the background actors in the film are local folks, most of them knew Jen personally before the shoot. Many had taken the Adult BeginnerBallet class she teaches Monday nights, or others had been in her workout class and were “Kicked into Shape Boot Camp” students. The local community gave their time to support the film and enjoyed the process–even when the extras at the school had to wait while blaring dirt bikes raced on the track adjacent to the school. Finally all went quiet when Executive Producer Mark Lobene and Producer Adrienne Paxton disappeared up the hill to beg the noisy riders to take a break. Even the dirt bikers were understanding, suspending their weekend routine, so that production could resume, and the extras could finish shooting their scenes outside the school. Jen is excited for her local friends to see the film. “I want them so see how it all comes together. That the time they spent on set really pays off, all the camera angles we shot, the multiple takes in the hot sun, it all contributes to the story.”

Friends & Film Makers: It was a no brainer for Jiles to ask her best friend since 10th grade, two time Emmy Award-winning television producer, artist and jewelry designer, Adrienne Paxton if she would design the jewelry for the film. Jennifer also invited Adrienne to the call back auditions with her and Mark to provide trusted input on final casting choices. But on the first day of shooting, it was clear (from the chaos) that more help was needed behind the scenes. Adrienne dropped her jewelry off on set and then stayed all day, jumping in to help out.

“As the day was winding down, Jen asked if I was coming back tomorrow, in a tone that said ‘please come back.’ I told her, ‘yes, I’ll be here.’ Then she made sure I’d come back every day, by offering me a formal role as producer.”

EP Mark Lobene immediately hired Ms Paxton to come on board. “Having a person of Adrienne’s experience with us was going to turbo the film forward-I could see that immediately and wanted Adrienne on board.”

“It’s really been a pleasure to work with Jenny and see all parts of this project come together. I’m so proud of her,” Paxton says.”Knowing it all started from an idea she had, characters she created, funny moments she invented.” Adrienne, in fact, was the one to bring her close college friend, fellow Fordham Alum and LA writer/director Lee Davis into the mix.

“Lee Davis brings an enormous amount of expertise both as a screenwriter and director. Lee has been working in Hollywood for over a decade, on tv movies, features, shorts and music videos. Seamlessly integrating with the MOTW team, Lee provided us with keen insight into production efficiency and drew out nuances of performance as well as story.”
Lee, who is based in Los Angeles, flew to New York to work on Mother of the Week. Davis says, “This was a unique opportunity for me to direct a comedy back in my own hometown, and to tell a different kind of story, that of the plight of the modern day suburban working mother. I hadn’t been that far north in the state of New York since my college days. It was a great experience. The production team and cast were talented, dedicated and committed to the project, and so it really made me feel quite at home.” 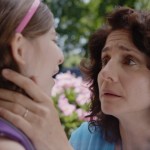 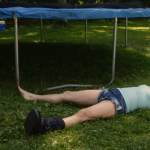 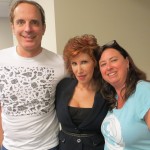 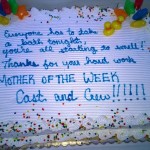 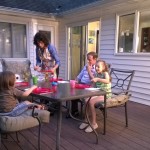 Mother of
the Week©

MOTHER OF THE WEEK© is the story of a stressed-out working mom determined to be everything to everyone, no matter what the circumstances. Executive Produced by Mark Lobene, Directed by Lee Davis, and written by Emmy-winner Jennifer Jiles and Frederick Stroppel, this film is for EveryMom, and anyone who knows and loves her.

More about the film